First disconnect the power before doing any repair work. 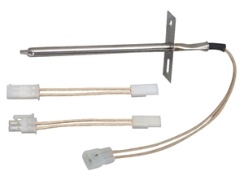 Look up in the upper portion of the oven for a tube-like metal rod usually about 6" long. It should have 2 screws holding it in. Remove these screws. Note be sure to put a good amount of pressure removing these screws they are often rusted and strip out easily. Now if the screws are not visible from inside the oven you will need to remove the back panel. Once you remove the screws carefully pull the wires thru the opening until the plug connector comes out. There will be insulation that may come along with it. Once you have the connector out unplug it. Now set your multimeter to the ohms setting on the 1x scale. Connect one lead to each of the terminal of the oven temperature sensor. You should have a reading between 1000-1100 ohms at room temperature. The temperature effects the reading. If it is not in this range replace the sensor. If it is in this range your problem is in the control or the wiring going from the control to the sensor. To replace the oven temperature sensor connect the wiring. If the new sensor did not come with the correct plug special ceramic wire nuts can be used for a cut and splice repair. Carefully slide the wiring back into the hole until you can align the sensor mounting holes. Then reinstall 2 screws. Some of the symptoms of an oven temperature sensor failure is oven will not maintain temperature, Oven overheats, Oven underheats, oven temperature is erratic, fault code, f4, f5, f9, F1, F2, F5, F10, F30, F31, F3-E0, F3-E1, F3-E2, F3-E3, E0-F3, E1-F3, E2-F3 and E3-F3, oven will not heat up, problems after self-cleaning. . This repair covers many models such as Admiral, Amana, Asko, Bosch, Caloric, Dacor, Estate, Frigidaire, Fisher Paykel, Gemini, General Electric, Gibson, Hamilton, HotPoint, Jenn Air, Kelvinator, Kenmore, Kitchen Aid, LG, Magic Chef, Maytag, Miele, RCA, Roper, Samsung, Sears, Tappan, Thermador, White-Westinghouse, Whirlpool